In the book I'm reading, it describes riding the Trans-Siberian railway as taking a journey along the 'spine of Russia'. Having done the first bit of this journey, I really understand this. The track, 9,289 km long, holds this vast, sprawling country together. Without the Trans-Siberian, the villages, towns and even big cities we went past would be completely isolated. The railway also means families who can't afford to travel by plane, can come together for a lot cheaper.

We saw a lot of this. Family members dropping loved ones off or collecting them at the train station. It's always a lovely scene to watch. Russian warmth and love at its best. When our train from Paris - Moscow stopped in Berlin at 6am in the morning, a babushka from Belarus got on, along with her son, daughter-in-law and granddaughter. Her family had all got up early to help settle her on her long train journey back home seeing her off with hugs and kisses so warm I could almost feel them too.

The history of the railway itself is also quite amazing. Knowing that we are riding the same line that Stalin used to send thousands of people into exile to work in the gulags is both chilling but also quite exciting. At 2102 km we officially entered Siberia. Here a square pillar, ten to twelve feet high marks the spot where thousands of exiled people - peasants, nobles, women and children said goodbye to their families - often forever. 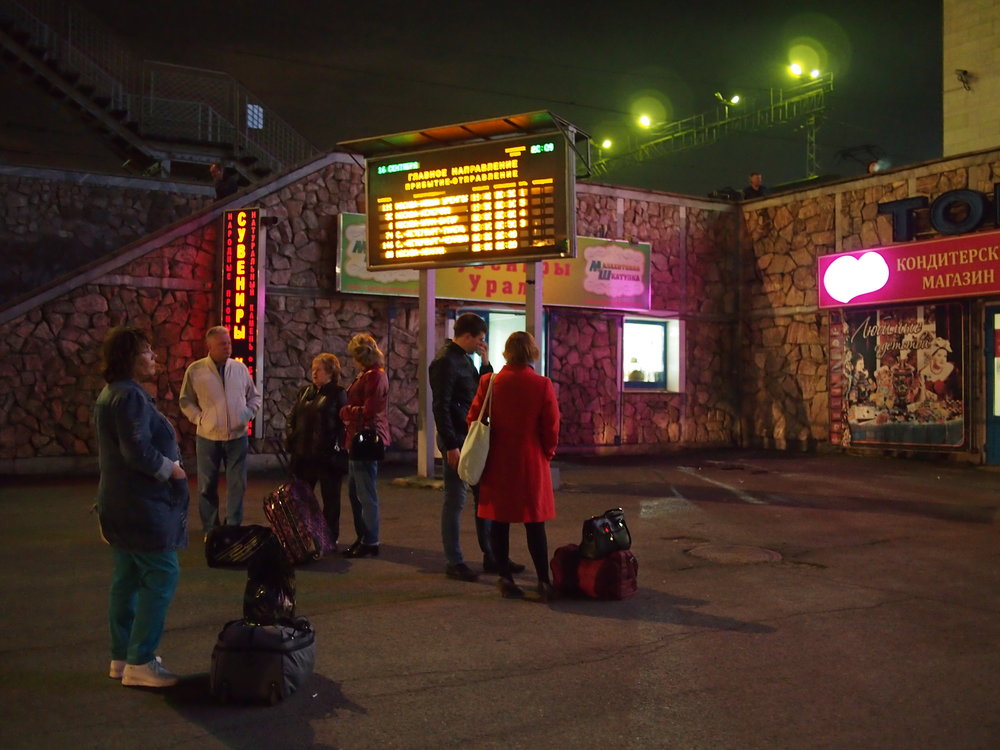 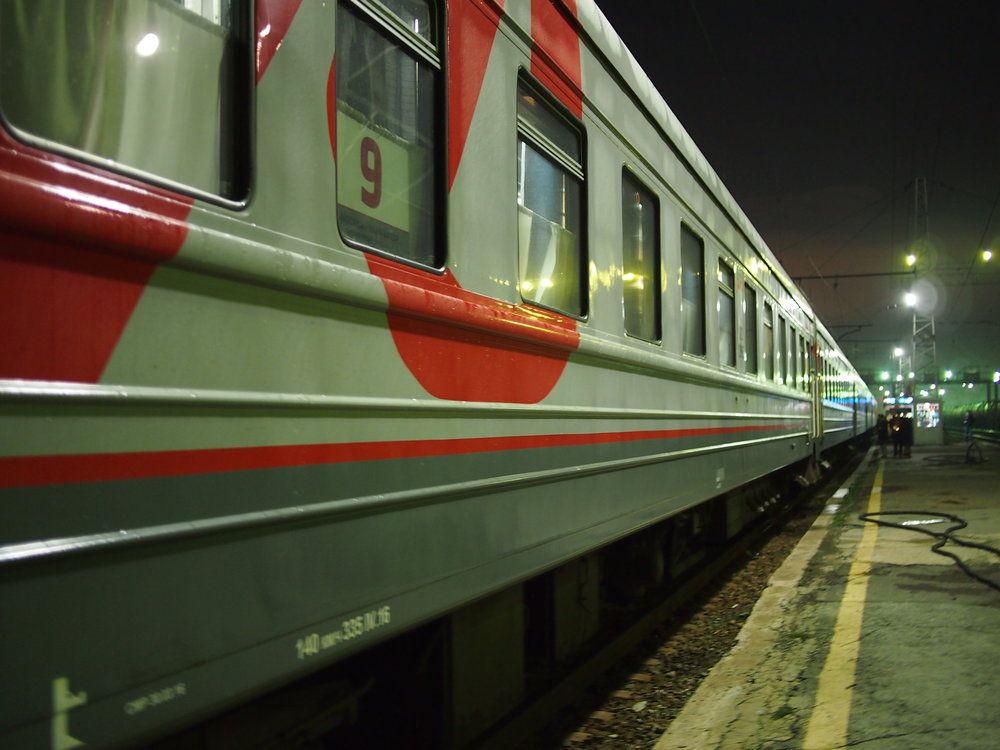 Getting on the train

Yaroslavsky station, 22:45pm - we have one hour until we board our train from Moscow to Irkutsk. As well as our normal load, we now also have three full bags of shopping containing treats such as Nutella, cheese slices, apple juice and red wine. On the train ride from Paris, we learnt from the two Russian babushkas who boarded at Berlin about the necessity to come with supplies on long train journeys. This time we were prepared.

Our platform number flickers onto the board at around 11pm. We schlep all of our stuff through the security cabins and pop out at our platform which is bustling with people saying goodbyes and having their last cigarettes before boarding. Our carriage is number 9 and we are greeted at the door by our two provodnitsas or conductors, a petite but stern looking 50 something blonde lady and a rounded older man. Nobody is smiling.

As with all official people in Russian, they are dressed impeccably in grey suits, white gloves and a shiny RZD hat. They check our tickets and zap our passports with a fun machine before letting us on.

Our provodnitsas are not warm or friendly but throughout our four day journey we see and interact with them regularly. They bring us tea, provide hot water, bring us sheets, hoover, open and close the train doors and stop us from doing thing that are strictly forbidden like taking photos and walking aimlessly up and down the train. In time, we grow to quite like our two provodnitsas and they grow to tolerate us back. The man even smiled at me once, I think it was on day 3.

So, on we get shuffling down the narrow corridor of the train looking for our berth numbers trying not to knock out any old grannies with our bags. The berths are your beds which are all numbered and displayed on the outside of each separate cabin. We are staying in Kupe, which translates to 2nd class and means that each cabin has four berths in it, two upper and two lower.

It's always great fun exploring your cabin and living quarters on the train and getting settled in. The cabins are tiny so it doesn't take long and this time we are prepared. We have our food bags which we store underneath the lower berth. Then we have our carefully prepared 'train packing cubes' with all the bits we'll need over the next four days. Once that and our toiletries are out, we store our large rucksacks away for the whole time.

For me though, the most exciting moments getting on the train is seeing who you are going to be living with. Russians are pretty hard to crack and are often cold and distant in public. The intimacy of a long train journey quickly rectifies this problem and the cabins provide a unique opportunity to get to know the locals and experience some Russian hospitality.

Milla is already sitting looking out the window when we enter our cabin. We are red in the face and in a flap, bags and belongings flying around everywhere. Milla is the opposite. Entirely composed, bed made, one bag with everything she needs for the trip stored under her berth. She is slim, has blonde bob haircut and glasses. She gives us a smile and tries to tell us where to store all our bits. She quickly learns we are foreign although luckily she speaks pigeon English which actually gets us quite far in the end.

During the first hour of the journey we sit chatting to Milla. We find out she is going to Mongolia for her school anniversary. She was born in Mongolia, near the Russian border and moved to Russia in 1976. Milla is 60 and has three children and two grandchildren. Milla is short for Luydmilla and she tells us her daughter's name is Miliana and her granddaughter is Ana. This made us smile because all Russians seem to be called the same name and Milla's family is a great example of this.

Her family all live in Moscow with her although her mother lives alone in a town near Irkutsk in Siberia. After her school reunion she is meeting a friend and they are travelling together to Beijing for a week. Then after, she is the getting a train all the way back to Moscow. This will take six days.

She thinks our journey is mad and has only chosen to take the train all the way because she hates flying. She is also surprised, like many people we've told, that we are not students and had actually been working for a good few years in London before this trip.

We find out a few more bits and pieces about Milla over the next four days. She is so warm and friendly, offering us food, buying us ice-creams and checking we are OK. We grow so attached that when an older drunk Russian man starts following her around the carriage, we get quite protective. She is way too good for him!

At the end of the four days, we are both sad to say goodbye. She gives us a big hug and a chocolate bar for our onward journey saying, 'for my English son and my English daughter.' This feels typical of Russians. Spend some time and share some experiences and you quickly become family.

After familiarising ourselves with every nook and cranny inside our cabin, the next fun thing to do is to venture out and explore the rest of the train.

The toilets are pretty simple but they do the trick. Each carriage has a room with a metal toilet and sink. The flush for the toilet is a pedal at the side which when pushed opens a flap revealing the tracks whooshing past below. All toilets are shut near cities and towns for around 15 mins for hygiene reasons.

The first times we went to the toilet, we couldn't work out how to get running water from the tap. Michael even asked someone and came back very excited saying 'you wouldn't believe it, but the taps are motion sensitive. That's strange for a train like this!' It was only until I went later on I noticed the tiny button under the nozzle that the man had actually been pushing to get water to run. No motion sensors, but a nice idea!

There is also a tired looking urn for boiling water on every carriage. Excellent for our porridge and pot noodles. Totally living the life we are.

Provodnitsas also provide coffee and tea in these fancy mugs which we really wanted to steal.

Each train also has restaurant carts which serve mediocre food. My favourite thing about our restaurant cart was the grumpy but hilarious provodnitsa. Here she is looking fabulous along with the food we ate. Goulash and pork escalope. Mainly because they were the only things available on the menu (we've experienced this a lot is Russia):

The entire train network works on Moscow time. All tickets have Moscow time, the platforms and signs inside the carriages also display Moscow time. However, the restaurant works on local time which can get quite confusing. We changed our watches and devices to show local time so we could try get an eating and sleeping routine going.

Neither my electrical items nor my internal body clock could get used to the changing time zones and Mike and I both found ourselves awake and hungry at all sorts of weird times. Although actually, on a long train journey, where sleeping can be done during the day or the night, there's something hugely satisfying about being awake whilst the rest of the train sleeps. I loved my 3am gazing sessions, looking out the window at the strange Siberian mist, watching the shadows forming across the vast landscape and listening to some Bon Iver.

Usual questions in the middle of the night include, 'do you think Mike is awake too?', 'where are we?', 'what time is it?', 'do you think I should make a snack?'. These all become burning questions in the dead of night. If the train stops at stations in the middle of the night, it's a good opportunity to get out and stretch your legs. There are always lots of people around, Russia it appears never sleeps and trains run throughout the night.

- Window gazing. This is hours of fun - Making snacks and drinks - Walking up and down the train until someone stops us - Hanging out at the restaurant cart - Trying to take photos out the window - Organising our bits - Sleeping - Reading - Making new Russian friends

Read our tips and advice, or check out photos of the journey here.

Waking up in Sierra Leone