Learning From a Local - Our Trek Through Myanmar Countryside

'I'm lucky', Wen, our 23 year old Burmese guide told us, 'my parents wanted to help me get to university so they paid for me to resit the entrance exam four times. I passed it on the fifth.' He'd stopped under the shade of tree to answer my questions about education in Myanmar. In the short time we'd been walking together, I had noticed a pattern. With every question I asked, Wen stopped walking, thought (for a good few seconds), answered, smiled and walked on. Because of this, I was acutely aware that my questions distracted our walking flow and, because I had about a thousand of them, I tried my best not to be too frenzied in my questioning and space them out a bit. For my curious mind, this was almost unbearable.

We were on a three day trek through Myanmar's countryside from the beautiful Inle Lake to the cooler climates of the Kalaw hill station. I was reveling in the opportunity to spend quality time with a local and was keen to learn as much as I could in the short time we had. 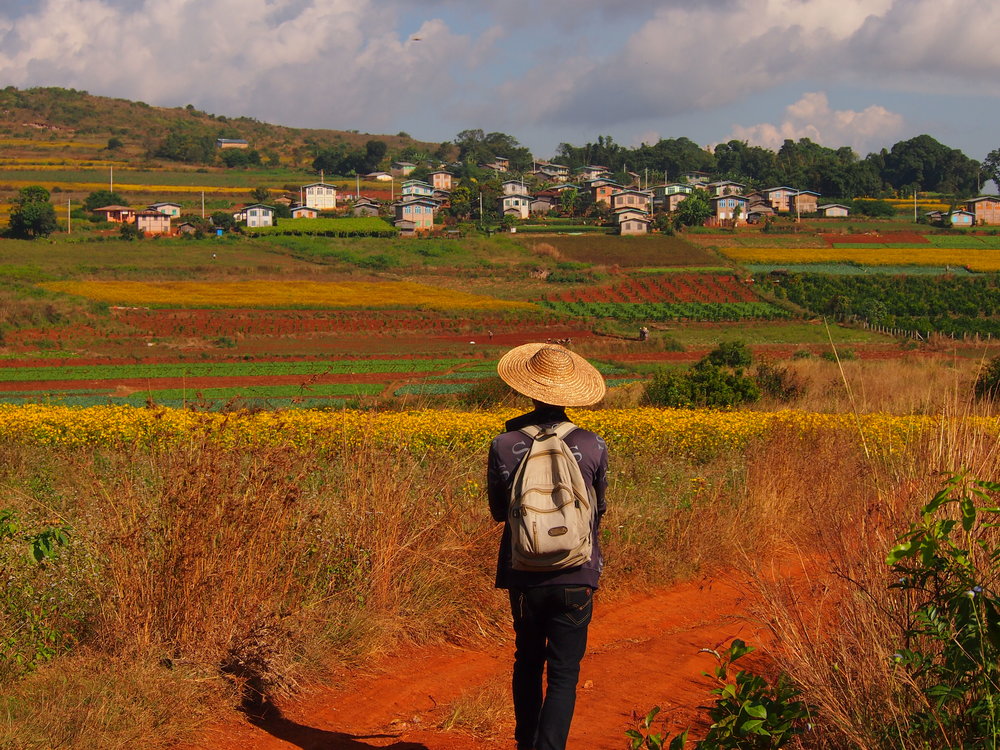 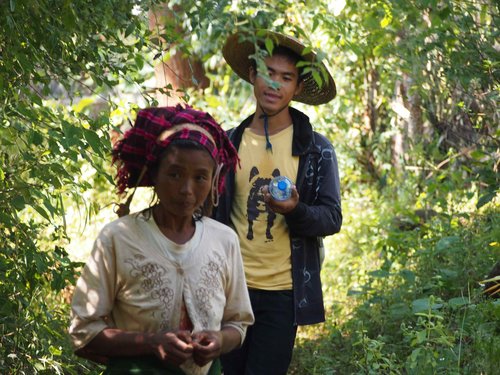 As we stood under the tree, admiring the vibrant colours of Myanmar's gently rolling hills, we listened and learnt more about Wen's university experience. The exam to get into university is apparently very difficult. It covers six key subjects including maths, science and English and Wen explains to us that only 40% of students pass. Once through, there are two types of universities in Myanmar. One where you study for eight months and work for four, the other where you study only for a few months and work the rest of the year. The fees are $300/year and the university system is a stark reminder of the poverty that exists in modern day Myanmar. Of those that make it through the tough exam, relatively few can afford the fees easily and families work incredibly hard and risk much to see their kids through. All students have to work throughout to afford the privilege that comes with a university degree.

Wen is studying philosophy and hopes to become a university teacher. It is a long slog. At 23, he is in the second year of his four year university course. After this he will study for a further three years and take multiple exams if he is to bag his dream job. His sister is 20 and would like also to become a school teacher but Wen tells us university professors get paid around ten thousand Kyat more per month. That is only around £6 more a month yet this is worth the extra work for Wen.

When Wen (these double whens got very confusing at times!) isn't studying he works as a guide (approx. 10 days/month) or on his family farm which is in village near to Inle Lake. The villages and countryside around Inle Lake provide the perfect fertile land for farming and producing crops all year round. Being close to the lake means there is no shortage of water even in the dry winter months. His family of five, mum, dad and two sisters, grow garlic and ginger and in the spring, corn. His upbringing means he was an excellent source of local knowledge and was able to enlighten us about the different crops, what conditions were needed for them to flourish and what the process was. 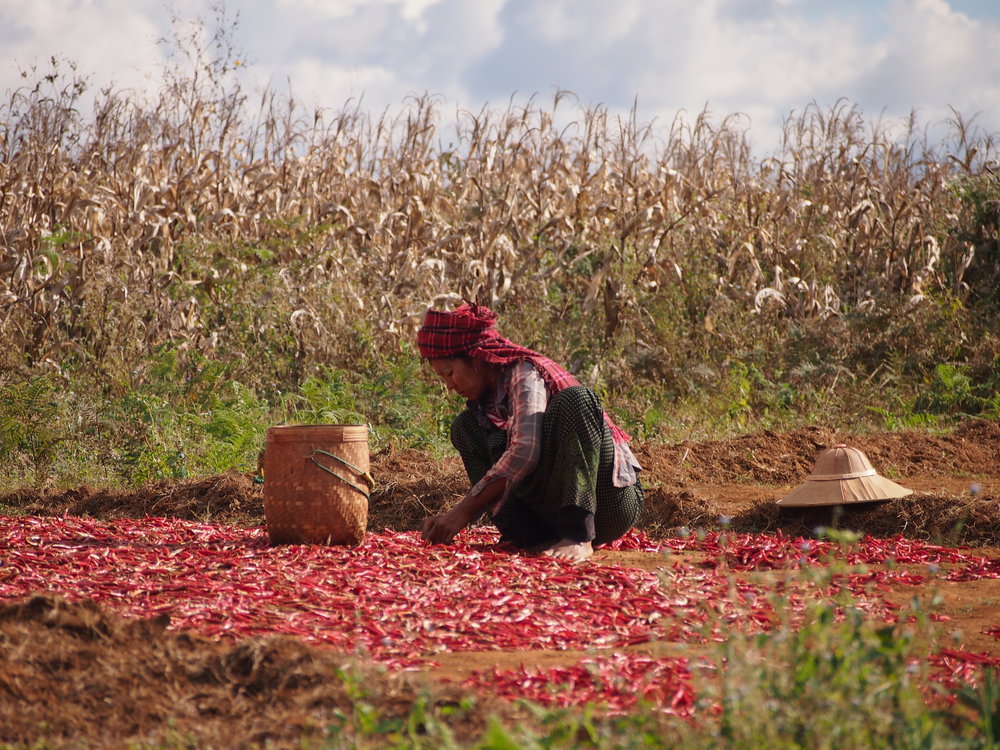 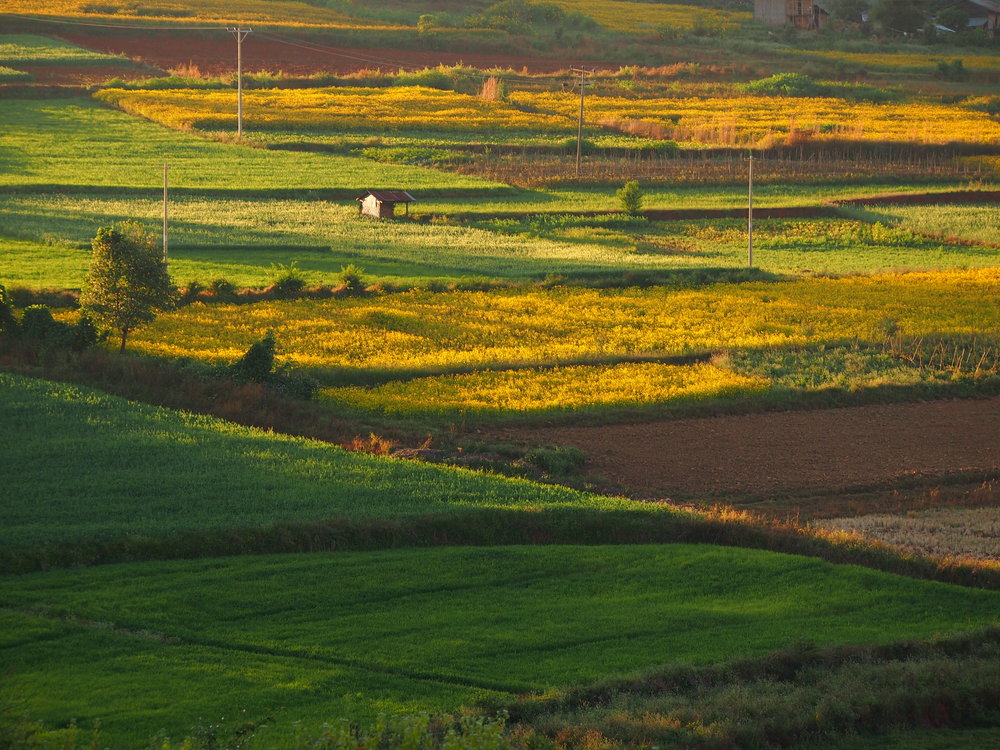 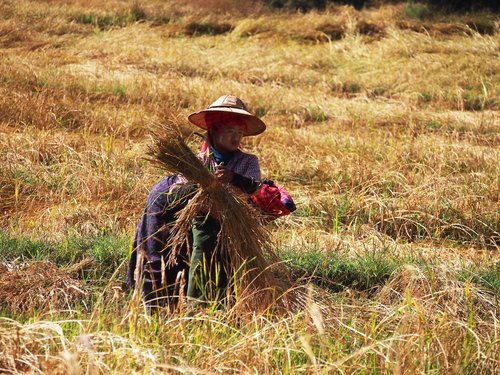 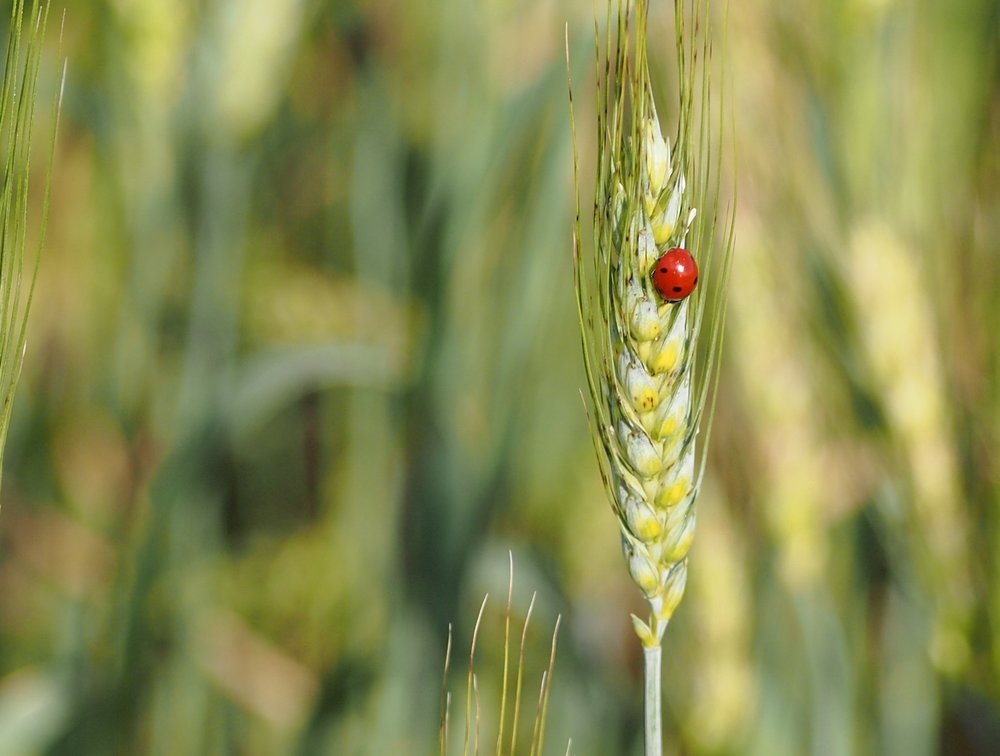 We walked for miles through neatly divided fields of wheat, corn, chillies, cabbages, lettuces, cauliflowers, cucumbers and garlic cloves. It was all fabulously colourful. I loved the ripseed plants whose bright yellow flowers are dried out and seeds crushed to make oil. In some places the flowers had grown so tall, I, inevitably always at the back, completely lost sight of Wen and Mike. Wen also introduced us to the Mimosa plant or as Wen called it the 'don't touch me' plant. When touched, the leaves of a Mimosa plant curl up and wither, the plant then 'sleeps' for fifteen minutes before unraveling again to face the sun. We know plants are alive but this was the first time I'd experienced plants being so full of life before. After that I couldn't help touch them for the rest of the trek!

The fields were always brimming with life, work and daily routines of local villagers which was great to watch. Whether it was picking the garlic cloves apart, sowing new green mustard seeds, laying chillies out to dry or whacking wheat with plastic bags to release the rice from its husks, we saw men and women of all ages out working the fields. In Myanmar, having a baby girl is just as celebrated as a baby boy as girls are thought to care for their parents better in later life. Wen explained that in agriculture and in home life, men and women have similar responsibilities and when one is at home, the other takes up shovel and hose in the family fields. With newly appointed female state councillor, Aung San Sun Kyi, who is adored, on the surface Myanmar appears pretty equal for men and women alike. 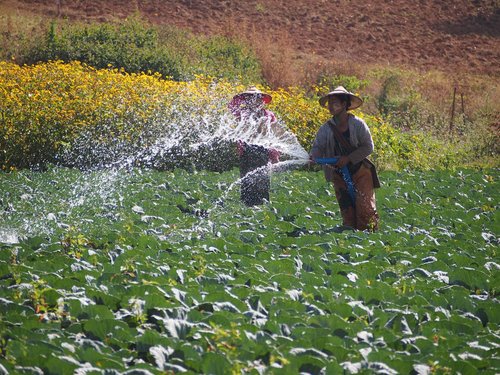 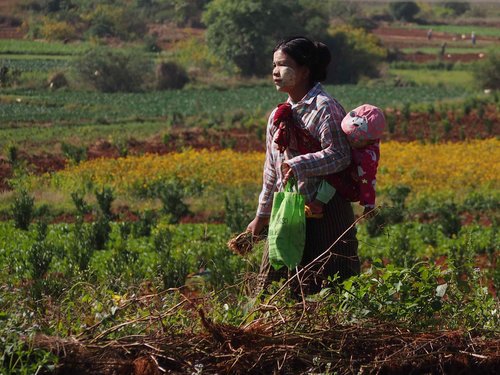 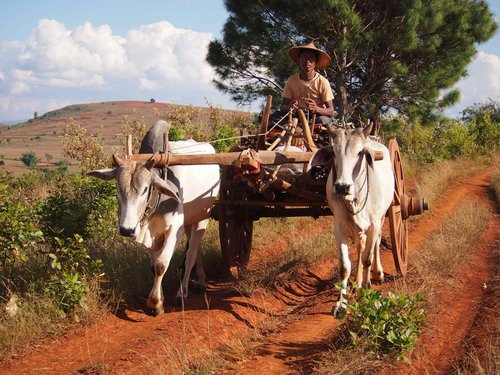 Apart from the crops, there were also mini Buddhist shrines and stupas dotted around, especially near the villages. Having spent almost a month in Myanmar I can safely say that Buddha has some of the greatest real estate around.

89% of Myanmar's population is Buddhist and it forms an important part of family and community life. All the family homes we ate or slept in during the trek had a picture or mini shrine for Buddha, and marks of respect, like taking of your shoes before you enter a building, can be seen across all of Myanmar.

Wen's family seemed quite typical in that they each went a few times a month and made a special effort once a month on full moon day. There didn't seem to be any pressure to go to the temple though and Wen said he goes when he feels like it and not because he has to.

The trek also gave us a fascinating insight into the lives and culture of the minority groups living in the area. Myanmar has eight main ethnic groups including Bamar, Shan, Chin and Rakhine and as well as those main groups, it has many others that make up the remaining 5% of the country's population. The most noticeable difference about the Bamar, was their traditional dress. Both men and women alike wear these amazingly colourful headdresses or scarves. Men's often wore white shirts and turbans on a black longyi (traditional skirt or fabric that is tied). 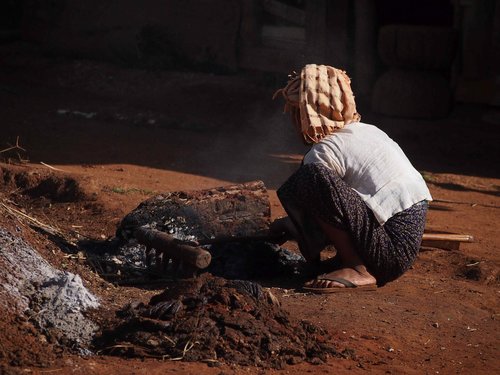 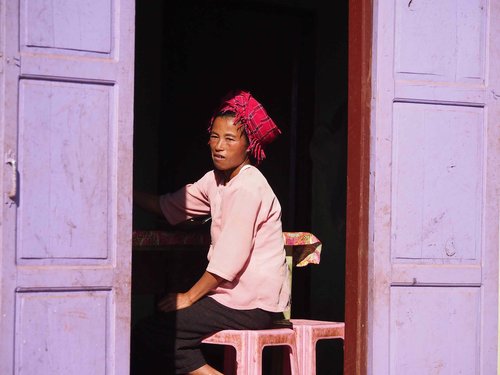 In the villages, we saw many locals grouped under trees, peeling back bamboo branches and weaving newly shaved strips into wonderfully intricate baskets. Bamboo is an amazing material. Incredibly strong and tactile and in Myanmar, it is used for pretty much everything. The larger bamboo sticks, around 10cm in diameter, are used for bridges, boats, scaffolding in the cities and foundations for homes in villages. Slightly smaller bamboo is placed in a grid pattern and used to fortify floors and ceilings of homes and thinner strips are used to weave all sorts including baskets, hats, baby carriers and bowls.

Wen told us that one person can weave three baskets a day. They are then sold to wholesalers in the big cities similar to the crops grown in the area.

Apart from bumping into a few tourists on route and staying in the evening with a couple from Chile, we were pretty isolated. It was a great chance to ask Wen about his life, meet locals and experience Myanmar agriculture at its most colourful. Highly recommend!

Waking up in Sierra Leone